‘New Thangka’ and Representations of the Party-State in Tibetan Art

Last week Jiang Zemin, the man who served as General Secretary of the Communist Party of China from 1989 to 2002 and is affectionately (or perhaps not) known as “Uncle Toad“, celebrated his 90th birthday. To commemorate the former president hitting the big 9-0, a tidal wave of “toad worship” descended over Weibo, with a flurry of colourful pictures, memes, and gifs of toads and over-sized spectacles circulating widely. Among them all, one image in particular caught my eye:

Painted by two Tibetan artists and one Yao artist who has lived and worked in Lhasa for years, the image depicts Jiang presenting a khata (a traditional ceremonial scarf) to Caidan Zhuoma (Tib: Tseten Dolma), a famous Tibetan singer known for her songs celebrating China’s ‘peaceful liberation’ of Tibet, the end of ‘feudal serfdom’, and so on.

The distinct blend of overt party-state propaganda, socialist realism, and traditional Tibetan painting style was new to me, and it got me wondering how much more of it could be out there.

A few minutes searching around Baidu yielded no end of the stuff. Representations of Chinese senior party officials were popping up left, right and centre across Chinese state media outlets in what was invariably referred to as ‘New Thangka’  (新唐卡), or as many Tibetan netizens have started calling it “党卡” (dangka), where “dang” refers to the Communist Party.

It turned out Jiang was far from the only leader to get the Thangka treatment. In fact, I soon learned that the piece he appeared in was part of a wider set, all by Tsering Wanggyal, Li Zhibao, and Lhakpa Tsering.

Comrade Hu Jintao and a Tibetan Child Together

Thangka (Tib: ཐང་ཀ ; Ch: 唐卡), as many readers will know, is a form of traditional Tibetan artwork, often depicting Buddhist deities, bodhisattvas, and other elements of Tibetan Buddhism. But, what about ‘New Thangka’?

Googling the term in English proved fruitless, but thanks to a suggestion by Françoise Pommaret, I found some work on “New Tibetan Painting” (Tib: བོད་ཀྱི་རི་མོ་གསར་པ་; Ch: 新藏画）by Per Kvaerne. Beginning in the Tibetan town of Kanze in the 1980s, “New Tibetan Art” combined elements of traditional Tibetan painting with modern Chinese art and was “consciously and systematically put to ideoloigcal use” (Kvaerne 1994: 166). Perhaps “New Thangka” and “New Tibetan Art” were one and the same thing?

In any case, searching “New Thangka” in Mandarin yielded plenty of results. A precise definition, however, seemed pretty hard to come by. One Xinhua piece provided an enthusiastic but vague description of “New Thangka” as “a moment of flourishing reform for traditional Tibetan Thangka, a single leap from traditional craft art into modern painting.”

Some of these so-called “New Thangka” paintings display the bold attempts of mainstream artists. Though sticking with the age-old forms, the content is not of the past. It empties into the ceaseless flow of news and information of this era of rapid progress. Tractors, cars, planes and related symbols of material progress. There are also portraits and so on of authorities (权力者), communicating political meanings. Even more “New Thangka” draw lessons from forms of expression of both Chinese and western art, longing to become an independent work of art. Do these “New Thangka” stray too far from the authentic Thangka? Without religious elements, even if they use traditional methods, is it still Thangka? 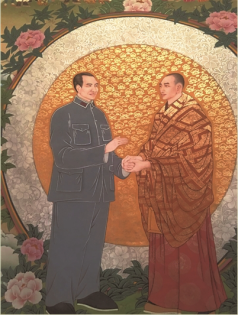 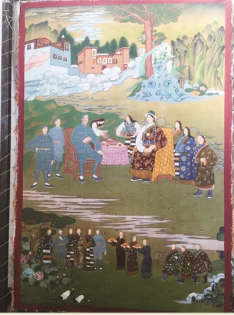 The Red Army in Jinchuan

What I found surprising was that many of these New Thangka, even those featuring Mao and Deng, are all very recent. Most were completed in the last four years as part of the ongoing propaganda overload that is the “Hundred New Thangkas Project”. Initiated in 2012 by the Party Committee and government of the Tibet Autonomous Region, this “significant cultural project” was promoted to mark the 60th anniversary of Tibet’s “peaceful liberation”. The project involves over 70 Thangka painters (almost all Tibetan) covering themes “of grand reforms and constructions, important historical events, figures and changes of Tibet in 60 years after Tibet Peaceful Liberation”. 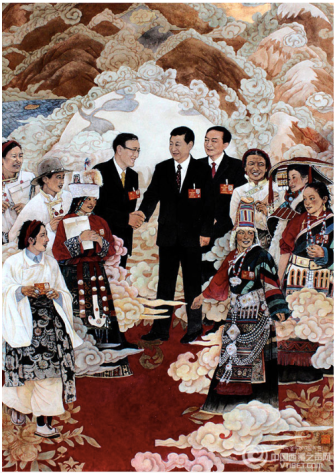 Another very recent batch of “New Thangka” showed up in a photo essay on Buddhism iFeng. Completed over the course of three years, they all featured in an exhibition hosted in Xining in early 2016. Here’s a quick slideshow of some “New Thangka” that appeared there.

It is also easy to spot the highly gendered dimensions of these Thangka. Apart from that one image featured above of Jiang Receives Caidan Zhuoma, women remain very much at the fringes of the scene, passively watching on as Han and Tibetan menfolk stride forward in socialist bromance.

Older examples of politicised Thangka seemed a little harder to come by on my first Baidu search, but maybe that’s a blog project for another time. One image that did pop up frequently during my searches was this: 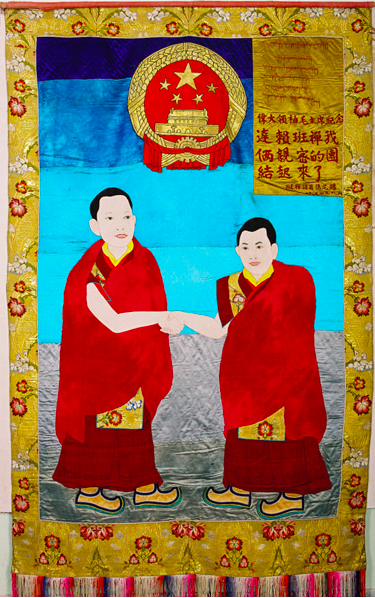 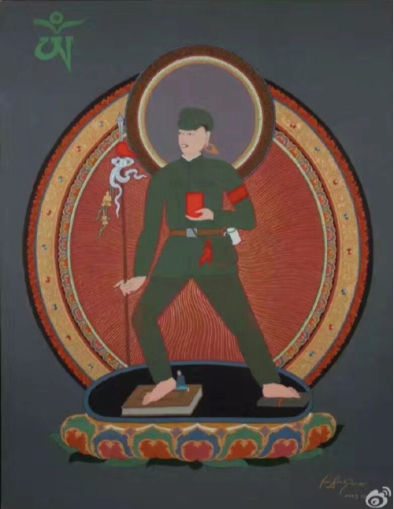 This Thangka, now held at the Cultural Palace of Nationalities in Beijing, was presented to Chairman Mao as a gift by the 10th Panchen Lama, Choekyi Gyaltsen, in October, 1954. It depicts a scene of the 14th Dalai Lama and the 10th Panchen Lama shaking hands below the national emblem of the People’s Republic of China. In the top right, in Tibetan and Mandarin, the words “Commemorating the Great leader Chairman Mao, the Dalai Lama and the Panchen Lama  both unite together. Donated by the Panchen Lama, October 1954.”

So, what to make of all these very patriotic Tibetan-produced “New Thangka”, brimming with harmony, gratitude, and socialist zeal? Has party-state indoctrination and patriotic education got the best of artists in contemporary Tibet, or are there really so many artists in Tibet who believe in the party-state promise?

Without having talked to any of the contributors, I can only hazard what I reckon is a safe guess, and that is that the majority of contributors to the above collections are just being strategic, i.e. taking advantage of an opportunity for paid work, the chance to make new contacts, build new networks etc.

Speaking about it all with Leigh Miller, an expert on Contemporary Tibetan Art at Maitripa College, I learned that artist opportunism would not tell the full story. In recent years, she said, there has been some pressure to accept party-state commissions, adding “how can they really decline without knowing there will be repercussions of one sort or another?” Leigh also noted that in some cases, the Han leaders or contacts are also personal contacts – professional or as former teachers, etc.

And on a final note, is this all there is to artistic innovation in 21st century Tibet? Of course not. Contemporary Tibetan art is an exceptionally dynamic, creative and bold space, regularly drawing from tradition while simultaneously experimenting with an endless array of new ideas and styles from within Tibet and further afield. And as the work of Gade, one of the most important and influential Tibetan artists in Tibet today shows, representing leaders in considerably more ambiguous ways is not unknown…

Thanks to Leigh Miller and Françoise Pommaret for their helpful comments and suggestions!