Feeling inspired by some fascinating papers on Tibet’s contemporary art scene at this year’s International Association of Tibet Studies conference, here’s a short blog on the life and work of Qijia Dawa, a Tibetan artist whose work I recently stumbled upon on a Tibetan literature and art website.

Qijia Dawa hails from Garzê Tibetan Autonomous Prefecture, Sichuan. He was born in 1946 and was orphaned at an early age. Soon after he was re-homed by the local government and sent to primary school.

In 1959 Qijia was recommended for admission to the Sichuan Academy of Fine Arts in Chongqing where he joined special classes for ethnic minority students and began his training in woodblock printing.

Following his graduation in 1964, Qijia was assigned to to the Sichuan Branch of the Chinese Artists Association to begin work as a professional printmaker. Since then, he has held a number of high-ranking positions at leading cultural institutions across China, among which include Sichuan Artists Association, Sichuan Provincial Museum, and Shenzhen Academy of Fine Arts. 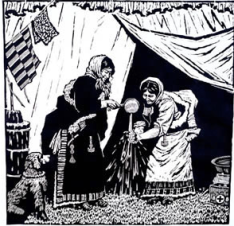 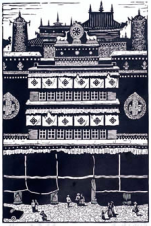 Though Qijia left the Tibetan Plateau at the age of 19 for study and work in interior China, he regularly describes the deep sense of attachment and affection he feels for his homeland as well as the ways in which this informs his work.

“I love my hometown, I love the plateau. Each snowy peak, each stretch of grassland, each section of river: they have at all times been a source of enchantment. My work have never left the grasslands, nor has it left the subject of Tibetan lives.” 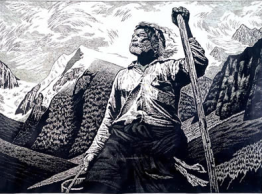 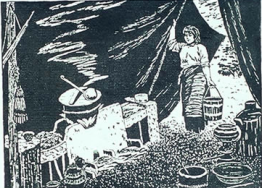 Qijia has returned to the grasslands at various points in his career, noting that the Tibetan Plateau has always been an important source of inspiration for his work. Garzê and Ngawa are two places he frequents most, though during the 60s and 70s he also spent time in the Tibet Autonomous Region (TAR).

“In 1965 I followed Niufen and Li Huanmin on their first trips to the TAR. From September of that year until January the following year, we three spent 3 months there. My second time to immerse myself in TAR life was from May to December in 1977, when Li Huanming, Song Guangxun, Xu Guang, A Ge, Ma Zhensheng and Zhu Licun and I, altogether seven of us, stayed in the TAR for more than half a year. Both of these periods were quite long. During that time transportation was very inconvenient, various things were lacking, there were language barriers, and we also experienced altitude sickness. We faced many challenges but also overcame all kinds of difficulties. From the frontier to the interior, from north to south, we entered deep into the realities of peasant homes, nomadic areas, army units, state farms, monasteries and historic sites. In these places we learned much about the socio-cultural transformation at the time.”

Now 50 years on, Qijia has produced well over one hundred of pieces of work depicting the everyday lives of ‘ordinary’ Tibetans across the plateau. Using both water-soluble ink and oil-based ink techniques throughout his woodcuts, Qijia is perhaps best known for his striking black and white portraits.

“I am eager to use my paintbrush to portray both the naturalness and mystique of the Land of Snow. I yearn to demonstrate the hardworking, tough, courageous, and kind character of my fellow Tibetans.” 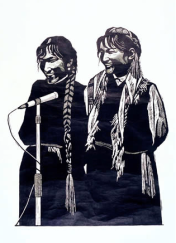 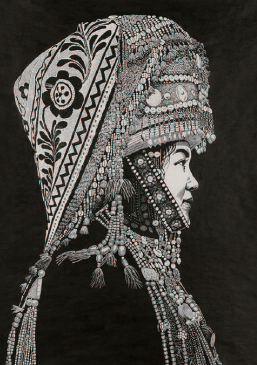 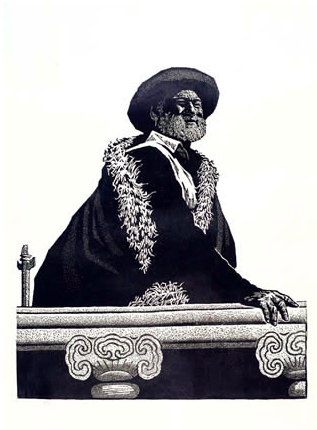 His work regularly explores past and recent experiences, often reflecting positively on change and progress. Military, education, and infrastructure are just some of hallmarks of modernity that have featured prominently in his prints to date.

“I have always wanted to paint the Qinghai-Tibet Railway. To build a rail line across such a plateau is really a landmark in human history. It must be expressed in art.”

Qijia is widely considered to be one of the most important representatives of the woodblock printing tradition in the People’s Republic of China. Some of his best most well-known pieces include ‘Beginnings’, ‘Man of the Forest’, ‘Meditation’ and ‘Golden Autumn’, all widely recognised as signature pieces in the development of modern Chinese woodblock printing.

His work has been exhibited around the world, including galleries in Canada, Malaysia, United States, and Germany.

Over the course of his career, Qijia has been awarded a number of prestigious prizes, among which include: